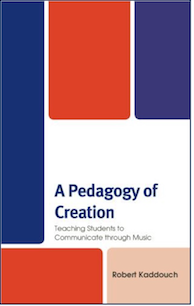 All of Robert Kaddouch's pedagogical theory, which is so creative in his reflection on creation itself, can be seen as a new interpretation of the famous formula of Pindar taken over by Nietzsche: "Become what you are." The pedagogy of creation developed by Kaddouch has an undeniable existential dimension, since it is a matter of realizing oneself by creating. This is the reason why this theory is articulated with a practice constantly present, Kaddouch being also and perhaps first of all an exceptional pedagogue of the musical creation. This also explains why this theory articulates centrally the concept of creation to that of communication: this is the meaning of what is here called ‘conductibility.’
— Jean-Hugues Barthélémy, director of the CIDES (Paris), associated researcher at the University Paris-Nanterre

In Robert Kaddouch’s book A Pedagogy of Creation: Teaching Students to Communicate through Music, readers discover how his piano lessons with Peter, Gary, and Elisabeth gave rise to a profound pedagogical theory and how he became an educator and theoretician of the ontogenesis of music. He discovered contact with sound in the young child leads, if the circumstances are favorable, from exploration to creation and creation, in music as in other arts, is sometimes a very solitary experience. Robert Kaddouch further observes and describes another aspect of creation: creation through communication, and communication through creation, which he calls “conductivity.” This is indeed another dimension of music. The very young children approach the piano, with him, by four-handed improvisation, and in turn, it is the child who trains the adult in creative imagination.
— François Delalande, Groupe de Recherches Musicales, Institut National de l’Audiovisuel-GRM Paris

Robert Kaddouch provides a highly insightful, lively, and personal portrait of the pedagogical act and its challenges. His pedagogy of creation empowers students to uncover their potential in the pleasure of music making. This approach to music pedagogy, based on improvisation, is dialogic, empathic, exploratory, and, first and foremost, deeply human. A source of inspiration for both teachers and students.
— Simone Dalla Bella, University of Montreal

Drawing on many years of experience as a successful educator, pianist, improviser, and composer, Robert Kaddouch offers a sincere and serious presentation of creativity in the mental and emotional realm. Relying heavily on personal case studies and deep introspection, Kaddouch reveals a candid look at the possibilities of further deepening our understanding and interactions as educators with students. The central thesis, based on his notion of 'conductivity,' introduces readers to a process that is perennial and transcends one's age or gender, allowing anyone to go beyond their current limitations. A Pedagogy of Creation: Teaching Students to Communicate through Music is highly recommended for anyone genuinely interested in pedagogy and the creative process.
— Gary Peacock